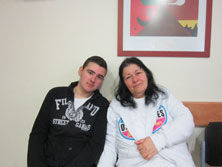 Estelle is a 35 year old single mom of two boys. Her marriage failed nine years ago because of her husband’s drug abuse. With her husband gone and the job market gone due to the years of terrorist Kassam rocket attacks on Sderot she was not able to find work right away.

She remembers the days when she had friends in Gaza and when it she would go to visit her friends there or to go to do shopping because things were always cheaper there than in Sderot, but those days are long gone.

Living on welfare and child support was not enough to keep food on the table, the lights on, and the rent paid. Eventually the power company put her on a “pay as you go” plan; the idea being you pay whatever you can and the meter clicks off the time you have paid for; when the money is gone the lights go out and the power shuts off until you put more money into the account.

That worked for a while but eventually she fell to far behind on the rent and the city came and shut off the water to her home, which made it impossible for her to stay there any longer. She did try to stay there for about two month without water and electric but it became impossible to continue for her and her boys.

During this time her oldest son got in trouble with the law and was sent to a live in school where his issues could be addressed. Today he is doing well and is allowed to come home every other weekend; except there is no home to come to now. Estelle moved in with a friend but she has now over stayed her welcome so things are tense to say the least there.

While in school, Eleron got into an argument and was pushed. As he fell his hand went through a window and cut his forearm. A piece of glass cut through the nerves and tendons of his left arm and today he lives with an 80% disability to his left arm.

We help her and her boys with food and like so many others we help it was no surprise when she came to us for help with paying for a medical treatment for left arm that was not covered by the Israeli medical insurance system.

Because we have a GOD who loves us and He has people like you who love Him as well and listen to His prompting to help us; we were able to send the needed funds for this treatment directly to the doctor.

For  Estelle, she remembers a time when life was a bit easier, happier and a whole lot safer. She recently got a job at a local super market and she hopes this will be the beginning of a turnaround in her life… We do to!