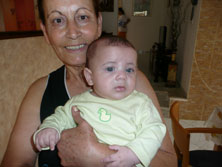 Elan was born four months ago. Here in Sderot, he will grow up with the threat of Kassams from Gaza, scuds missiles from Lebanon and the possible chemical attacks from Syria. What he will never grow up with; is knowing the loving arms of a mother or her tender embrace; she died giving birth to him.

He will grow up in a world that hates him because he is a Jew; he will hear the calls for the annihilation of his people by the countries that surround his homeland, his G-D given homeland. He will never see the smile of his mother but will see and feel the fury of his enemies.

Elan will grow up knowing the love of his grandmother who is helping her widowed son raise him. He will grow up with the knowledge that His G-D, the L-RD G-D of Abram, Isaac and Jacob loves him and will never forsake him; that his enemies will not prevail against him in the end.

He will grow up in his grandmother’s house, that took a direct hit by a Kassam a few years ago and with a grandmother who suffers still today from the effects of that terrorist attack against her. For her, with every new “Tseva Adom,” the effects are like that first drink for a recovering alcoholic, it takes her back to square one.

Thanks be to G-D, for right now he is somewhat oblivious to it all, although he has heard the whaling sound of “Tseva Adom”, (though he does not know what it means yet) he has felt the fear and trembling in his grandmother’s arms (though he may not know why she is scared as she grabs him from his sound sleep in his crib) and runs with him for shelter to the family safe room within fifteen second.

He will grow up hearing about Gaza, Iran, Syria, Lebanon and now Turkey. Hamas, Hezbollah, Mahmoud Ahmadinejad, Ismail Haniyeh, Mahmoud Abbas and Hassan Nasrallah will be common names he will hear as he grows up along with Kassam, Scud, Katyusha and Grad.

He will learn to always be vigilant and to know where to seek shelter. How to walk to school, maybe the long way because there are more shelters along that way than if he were to take the fastest route from home to school or anywhere for that matter.

I pray that Elan never has to hear about a time in the history of his country when the United States “used to” support his country and stood alongside her.
I pray that the L-RD would keep His hand on this little one as he grows up and also when at the ripe old age of eighteen when he dons an IDF uniform, puts down his toys and picks up an M-16.