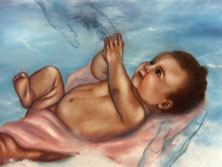 We wrote and told you about Elanete back in April 2009 and how she wanted to have an abortion because they could not afford another child. We made her promise us not to do anything until we could see how we could find her financial help for her new baby. You can read that story by clicking here.

BE’AD CHAIM, “Pro Life” in English is an Israeli non-profit organization dedicated to the protection of mothers and unborn children. They are a national organization with offices and Hotlines throughout Israel. All women are eligible for assistance, regardless of nationality or religious beliefs.

Through their project “Operation Moses”, (the one that helped Elanete), they supply women in crisis with all they need for the first year of their child’s life. This includes a baby stroller, crib, changing table and bath, along with monthly supplies of diapers, formula and other baby products.

BE’AD CHAIM counsels woman about the alternatives to abortion, encouraging them to keep their baby or if not to consider adoption instead of abortion. There are 5,000 people currently waiting to adopt a baby in Israel. BE’AD CHAIM would like to be able to say to them, “Stop going to Guatemala and Romania and paying all that money to adopt a baby.” But how can they when there are so few babies available in Israel? This is why BE’AD CHAIM has launched the adoption promotion program called “Operation Moses” – because Moses was the first adopted Israeli.

In the Holocaust 1.5 million Jewish children were killed, since then 2 million have died by abortion, that’s 40 thousand empty cribs a year. The IDF gives the first two abortions free to its female soldiers. BE’AD CHAIM is trying to change that one unborn life at a time. To go to the BE’AD CHAIM web site “click here”.

It is a blessing to have this resource to share with those we serve here in Sderot.

Editors note: Shortly after this story was written we were asked it we could help a single mom who just gave birth to twins. We are presently in contact with BE’AD CHAIM and will bring you the full story in a few weeks.