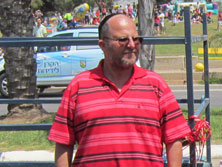 One day he went to Tel Aviv to buy some building material. He left the store and went out to tie the material to the top of his car. As he stepped out into the street he was hit by a bus and run over.

For the first few days doctors were not sure that Avi would survive the accident. But he did. He would have to learn how to walk all over again and his days of being a “Sapper” (part of the bomb disposal unit) were over as well.

The life style he and his family were accustomed to was also over and things soon became hard for them. His wife Haya, started to clean houses and watch children in their home. Because of his injuries and the trauma to his head, Avi is limited in the type of work he can do but he has reentered the work force working at a place where his disability is understood. He has to travel to Ashkelon each day for work, a 20 kilometer trip. On most days he hitchhikes to and from work because the gas for the car or the bus fare is just too much for their budget.

On any given day you can see Avi walking down the street or in the super market with a plastic bag full of paper. It seems that for him tearing paper is somehow therapeutically for him. He tears each piece into strips, each strip being almost the exact size.

Haya is presently watching three young children in their home each day to help and we too help with food on a regular basis. They are one of the thirty three families we deliver food to each month.

They are doing all they can to deal with what has happened in their lives. They have not given up, given in or quit!