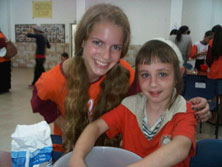 Aliza is sixteen years old. At that age I was out playing and doing whatever a sixteen year old teenager does during the summer. But for Aliza it was important to do something positive, heroic and unselfish.

She had been hoping to work in a summer camp but she did not want to do so in Chicago where she lives. Her dad suggested the Chabad camp here in Sderot. She has been to Sderot before and she knew the danger she could be facing. He desire to do good for others was stronger than any fear she had Kassam rockets being fired at us from terrorists in Gaza.

“Because teenagers like Aliza need to get out of the privileged American suburbs and experience everyday life in lesser-affluent Jewish communities and the children in those communities need to see that American Jews do more than simply send checks to far-away organizations.”

To send money to help is one thing and it is a very important thing for the organizations you help, but to be willing to give your daughter, takes it to the next level. It reminds me of Abraham and his willingness to sacrifice Isaac. You see Aliza is Mark’s only child. 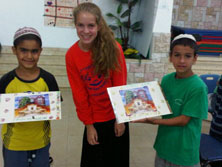 Aliza has helped out at the camp. Whether it was helping with arts and crafts, serving popcorn or teaching English, she has been busy helping and encouraging the youth of Sderot. To date she has had to find shelter five time from incoming Kassams from Gaza.

This type of selflessness is nothing new for Aliza. When she was 14, she stayed behind after her 8th grade class trip to Israel and spent several days in Hevron where she volunteered at the pre-school. She has also volunteered at Kolel Chabad soup kitchen at the Kotel, the Rehovot animal shelter, the Jerusalem animal shelter, Mercaz Chesed in Sderot and at the Chabad Hebrew back in Chicago.

When I asked Aliza’s father what was his biggest fear he had in sending his only child to serve in Sderot, he said “That she wouldn’t want to return to Chicago and that might not be a bad thing!”

In fall Aliza will be going into 11th Grade at Ida Crown Jewish Academy in Chicago. I wonder how she will spend next summer? Maybe she will come back to Sderot.