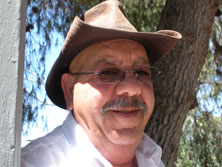 In 2007 Marko was happily driving his truck Dan to Beer’ Sheva, as the saying goes. He delivered everything from cargo containers to truckloads of flour, oil and building supplies. It was one of his last loads that changed his life forever.

On that June day, he dropped off what was supposed to be an empty cargo container at the Ashdod port, picked up a full container, and headed out to make the delivery. As he was leaving he heard gun shots.

When the “empty” container was opened, six armed terrorists jumped out and began shooting at anyone they could see at the port. When the shooting was over ten people were dead and seventeen of his co-workers lay wounded.

What will haunt Marko for the rest of his days will be not only the questions, how, why, and where, but also the public criticism and scrutiny surrounding him after the incident. In the end no legal charges were brought against Marko, because the subsequent investigation showed that the terrorists had built a false wall into the container and went undetected until the security band was cut and the shooting began.

Marko had to deal with the memories of that day for all the years that followed. There was counseling to help him through it and he added alcohol to his treatment as well. Finally Marko gave up truck-driving, something he loved and with which he had been able to provide a decent living for his family. Marko took a new, lower-paying job as a guard at one of the high-schools here in Sderot, and his wife, Eliza, went to work as well to help make up the difference.

As the Guard at the school, Marko sees what goes on, even which kids have something to eat at lunch time or not. He could not let kids go without lunch so out of his own pocket he started buying bread and all the making to give sandwiches to those who were going hungry; something he could not afford to do but did it anyway.

We learned of his heart for the kids at his school and through the generosity of The Joshua Fund, we are able to provide Marko with everything he needs to make forty sandwiches and 5 gallons of juice each day. So far this school year Marko has made over 8000 sandwiches.

Today Marko suffers from diabetes and it has taken quite a while to get his sugar levels down and out of the 300’s; he also suffers from sleep apnea. Both health issues, doctors say, stem from the stress that came from the incident.

This is one of the lives you and Hope For Sderot have touched with the unconditional love of G-D.