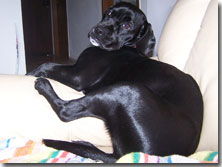 This week as Kobi was preparing for his upcoming surgery, one thing he needed to do was to make provisions for his dog Luka, a boxer labrador mix. On Sunday afternoon, he took Luka to Moti’s house. Their eighteen year old daughter agreed to take care of Luka while Kobi is in the hospital.

Kobi received a phone call Monday afternoon that Luka was not moving. Kobi and the rest of the volunteers headed over to Moti’s home to see what was the matter with Luka. When we got there we found that she was dead.

The investigators surmised that from the evidence found at the scene that Luka had attacked the burglar and due to the amount of blood at the scene she must have done some real damage to him. That came as a shock to me because I only know Luka as a playful pup who would lick me to death. She was not quite one year old yet.

Luka did her job and protected the house from the burglar, who had stocked the house, knew Luka was there and brought a syringe with poison in it. When Luka bit him, he must have injected the poison to kill her.

The police took blood samples from the scene, checked the DNA, made a positive match and arrested the burglar/killer of Luka.

We will miss Luka’s friendly greetings and playful spirit.

Kobi’s heart is broken over the loss of his dog. “She is a hero; she guarded the home she was staying at, even though it was not her own home. I will miss her, she was a good friend.”