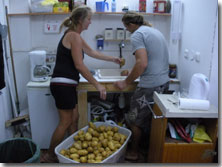 Cameron and Julie were scheduled to come to Israel in 2002 but due to terrorist attacks the tour was canceled at the last minute. Disappointed that their first trip to Israel was canceled, a friend suggested that they go to Hawaii instead, which they did. What they did not expect to do was fall in love with Hawaii. They packed up their three children and moved to Hawaii where they have lived for the past seven years.

Just last week their much delayed first trip to Israel finally happened. So what do you do when you come to Israel after you have waited seven years? Well, they spent some time in Jerusalem, Eilat, they made a trip to Petra, and they came to Sderot to volunteer.

Cameron is in construction and wanted to come and volunteer his services for a few days while he was here. We had a job all lined up to start the day he arrived, but it fell through at the last minute.

Someone once told me “blessed are the flexible” and that is exactly what Cameron and Julie were. We were able to spend some time repairing a door jamb, but then the flexible part kicked in. 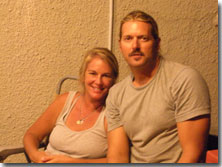 We had a food shipment arrive and they helped move 9358 cans, boxes, rolls and bottles, they also helped pack 130 bags of canned goods, packaged over 1300 fresh tomatoes and helped load our van with some 600 pounds of potatoes. Once back at the Moxon, they proceeded to wash each and everyone of them and that’s how they spent their first trip to Israel.

Maybe not an endless buffet and a five star hotel but a chance of a life time to connect with the people in Sderot. Toda raba Cameron and Julie.