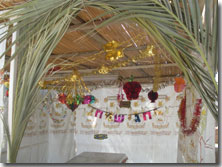 “And the LORD spoke to Moses, saying, Speak to the children of Israel, saying, The fifteenth day of this seventh month shall be the feast of tabernacles for seven days unto the LORD.
The festival of Sukkot is instituted in Leviticus 23:33. No work is permitted on the first and second days of the holiday. Work is permitted on the remaining days.

The Festival of Sukkot begins on Tishri 15, (October 3), the fifth day after Yom Kippur. It is e a drastic transition, from one of the most solemn holidays in our year to one of the most joyous. Sukkot is so unreservedly joyful that it is commonly referred to in Jewish prayer and literature as Z’man Simchateinu, the Season of our Rejoicing.
Sukkot is the last of the Shalosh R’galim (three pilgrimage festivals). Like Passover and Shavu’ot, Sukkot has a dual significance: historical and agricultural. Historically, Sukkot commemorates the forty-year period during which the children of Israel were wandering in the desert, living in temporary shelters. Agriculturally, Sukkot is a harvest festival and is sometimes referred to as Chag Ha-Asif, the Festival of Ingathering.
The word “Sukkot” means “booths,” and refers to the temporary dwellings that we are commanded to live in during this holiday in memory of the period of wandering in the wilderness. The Hebrew pronunciation of Sukkot is “Sue COAT”.
The name of the holiday is frequently translated “Feast of Tabernacles,” which, like many translations of Jewish terms, isn’t very useful. This translation is particularly misleading, because the word “tabernacle” in the Bible refers to the portable Sanctuary in the desert, a precursor to the Temple, called in Hebrew “mishkan.” The Hebrew word “sukkah” (plural: “sukkot”) refers to the temporary booths that people lived in, not to the Tabernacle.
Sukkot lasts for seven days. The two days following the festival, Shemini Atzeret (explains the holiday this way: our Creator is like a host, who invites us as visitors for a limited time, but when the time comes for us to leave, He has enjoyed himself so much that He asks us to stay another day.) and Simchat Torah, (Each week in synagogues the Torah is read, starting with Genesis Ch. 1 and working our way around to Deuteronomy 34. On Simchat Torah, we read the last Torah portion, and then proceed immediately to the first chapter of Genesis, reminding us that the Torah is a circle, and never ends.) are separate holidays but are related to Sukkot and are commonly thought of as part of Sukkot.
The festival of Sukkot is instituted in Leviticus 23:33. No work is permitted on the first and second days of the holiday. Work is permitted on the remaining days.
Take some time this week, look at all the stars, remember from where G-D has brought you and when you do that, you will truly have something to rejoice about.