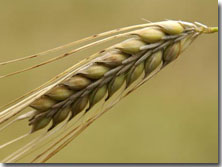 Many Jews celebrate Lag b’Omer. To understand why, one must first know the definition of an Omer. An omer is a measure of barley. In Biblical times, on the second day of Passover, it was a mitzvah to bring barley the size of an omer to the Temple in Jerusalem as an offering. Then fifty days later, on Shavuot, it was a mitzvah to bring the first offering of the new wheat harvest.
There are seven weeks (49 days) between the second day of Passover (when the omer was offered in the Temple) and Shavuot (the wheat harvest). The period

of these seven weeks is called the Counting of the Omer (Sefirat HaOmer).

“From the day after the Sabbath, the day that you bring the sheaf of wave-offering, you shall keep count until seven full weeks have elapsed: you shall count fifty days until the day after the seventh week, then you shall bring an offering of a new grain to the Lord. You shall bring from your settlements two full loaves of bread as a wave-offering … On that same day you shall hold a celebration, it shall be a sacred occasion for you …” (Lev. 23:15-21)

The Torah itself does not give us a reason for why we should Count the Omer. Over the years, Rabbis have provided us with several different explanations for this Biblical commandment.

In the Bible, Shavuot was an agricultural festival. Some say we were commanded to count the time from the second day of Passover when we gave an offering of the omer (sheaf of wheat) until the time of the wheat harvest when we needed to bring an offering of the new grain.

In the Bible, there is no fixed calendar date for celebrating Shavuot. Shavuot is defined as the day of celebration after the completion of the Omer Count. The Count tells us when to celebrate Shavuot.

Some say the Omer Count links Passover and Shavuot. While Passover commemorates the liberation from slavery to Pharaoh, the Israelites were not truly free until they received the rules and laws of the Torah and agreed to become servants to God. They were given freedom on Passover, and they were given the purpose of their freedom on Shavuot.