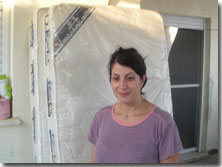 We reported in our last news letter that Ladana’s life was one of being between a rock and a hard place in so many areas of her young life; how she needed beds for her two young children; and how we were given a bunk bed frame that we could pass on to her, all we needed was two mattresses for it.

In Israel when you get something new, you place your old out on the street for those who are in need so that they can take it and use it. You would be surprised at some of the things you can find. Well we were told of a mattress that was out on the street, so we went to check it out… it was in good shape so we picked it up and told her about the find, to which she praised
G-D.

We were scheduled to deliver the frame and the one mattress we had found on Friday. We were contacted by a very special person staying here in Sderot who was aware the need and asked us where we could find two new mattresses for Ladana.

We went to the two stores here in Sderot, found the best price on the best mattresses and loaded them up for Ladana. But that was not quite enough… we were also asked to get two new sets of sheets for her as well.

It was a joy for me to be one of the three that delivered the new mattresses and bedding, but it was an even a greater joy to tell her “G-D loves you and there is someone here in Sderot who loves you also and this is a gift from Ha’Shem”

For me that is what Hope For Sderot is all about… Reminding his children He still loves them and that their only hope is in their L-RD G-D.