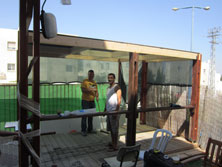 We recently were able to help Koby with a small building project in his back yard. With summer here it makes it almost impossible to sit outside before the sun goes down if you don’t have any shaded place to go to. We did just that, we built him a shaded place to sit.

It just so happened that a friend of ours from Northern Ireland came to spend a few days with us. As soon as Stephen arrived we put him to work. The last time he came he made it just in time to help with our Hanukah party. This time we put a hammer and drill in his hand as soon as his feet hit ground.

Some would say that to build a pergola for Koby seems to be a luxury and they might be right in some instances but not in this case.
As you may know Koby was injured severely by a Kassam six years ago. He did survive the terrorist attack but his life has never been the same. You can read his story by clicking here, here or here.

Two weeks ago Koby went to the doctor for some problem he is having. He has an infection in his heel due to poor blood circulation and the skin on his heel is dying. He now goes to the doctor weekly to have the dead skin removed and his heel bandaged. 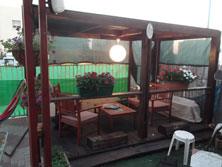 That would have been enough but the effect of that June 6, 2006 rocket attack persist to this day and will persist for the rest of his life. In addition to the problem with his heel they found some cancer spot that will be removed this month. Unfortunately the bad news didn’t stop there.

The numbness he is experiencing in his left arm and hand and the pain he has in his neck and back is due to a piece of shrapnel lodged on vertebra c4 and c5, not to mention the cartilage there is gone as well. The doctors don’t want to operate and remove the shrapnel because if something goes wrong Koby could become paralyzed for life. Over time he will lose the feeling in his arm and hand.

I guess here is where we talk about his knee that needs to be replaced. It is hard for him to walk and while we were there building the pergola it was hard to see him in pain from his bad knee. The doctors don’t want to replace the knee because he is too young (37). They will replace it when he is in his late 50’s. 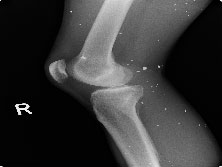 All the little white dots in the x-ray pictures poster here are all pieces of shrapnel still in his body… those too he ‘lives with”.
So to spend the time to build a pergola for him, did and will bring him some joy. It was well worth every penny and every drop of sweat it took to build it for him. Here is something positive he can just “Live with it”.

If you would like to help Koby by sending him a   financial gift   you can do so by clicking here. One hundred percent of your gift will go to Koby and a a signed acknowledgement of the gift by koby will be sent to you.