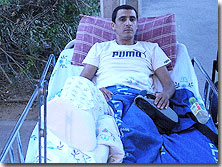 Kobi spent the last week in the hospital after his knee and ankle surgery. It appears that things went well and in time there will be improvement in the way he walks, but for now He will spend the next six weeks in bed with a cast on his leg and his leg elevated. He came home with a four millimeter piece of shrapnel they took out of his knee.

The doctor cut the cast two times so far because of the swelling that causes Kobi a lot of pain. They say the swelling should stop in about a week; meanwhile it is hard to sleep at night and the heat of summer here in the Negev just adds to his discomfort. He is also dealing with some depression as well.

He told me yesterday that he has spent the last four years learning to walk again; first with two crutches and then just one. Then he walked with the help of a cane, which he laid down for the past six months, except for when his leg really was hurting him. Now he says “I am back to square one, flat on my back, my leg in a cast just like the past and looking at crutches and physical therapy all over again and they are not sure what my leg will do once the cast is off.”

Hope For Sderot volunteers have become a family, and it was quite evident this past week as Moti spent most nights with Kobi in the hospital and it was not uncommon to have between five and twelve of us there at a time during the week. I have never seen such an outpouring of love like that before.

We pray for Kobi’s full and speedy recovery. We will keep you posted as he progresses.