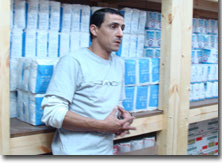 Many of you have read about Kobi in a previous article. He has been a good friend from day one. He is part of our staff and is loved by all. You may recall that he was hit by a Kassam and for all intents and purposes should have died… But by the grace of G-D and one miracle after another, he serves with us today.

After nineteen different surgeries, he is now facing two more, both on his right leg. On June 28th, he will go under the scalpel to try to repair damage to his ankle and eliminate some of his ongoing pain that is caused by “drop foot” due to the muscles that were destroyed by shrapnel. At the same time, they will try to remove pieces of shrapnel from his foot as well. The recovery time will be at least four months.

For us here at Hope For Sderot, he will be out of the picture for a while. Once he has recovered from his foot they will schedule him for his next surgery, to remove shrapnel from his right knee. As with others here in Sderot, the healing process takes years of surgeries one after another, hoping to regain what was lost when they heard “Tseva Adom” that day. Unfortunately, for most of them, that will never happen.
While talking with him today he told me of a dream he had the other night. He dreamt that after his upcoming surgery, after he awoke the doctors told him that things went wrong during the surgery and that had to amputate his leg. He said he woke up in a cold sweet, crying. He went on to tell me that he was not afraid of his past surgeries but he is afraid of this one. We ask that you would keep Kobi in your prayers.