We had gone to the market to pick up a few things but there was no bread in the first market so I walked over to the other market and left my co-worker still shopping in the first market. I got my bread and made my way up to the check out stand. When I got there I noticed a bunch of people coming into the store. As I gave my money to the lady for the bread she told me “No” and motioned for me to go back. It was then I realized there was a “Tseva Adom”.

As I made my way back into the store, away from the glass windows in the front of the store and started counting off the

fifteen seconds, I heard the loudest blast I had ever heard since living here in Sderot. As people ran out to see, I headed back to get my bread but as I heard the screams and them pointing towards the other market, I ran out to see. All I could see was smoke that looked like it was coming out of the market my co-worker was in.

As I ran to the marker I saw three or four cars with broken glass and black smoke. There were people running out of the store and all I could think about was my co-worker who was in the store at the time of the blast. I made my way through the smoke and broken glass into the market. The front doors were blown out and wine bottles were all over the floor. There was a lady there on the floor being attended by some store employees. 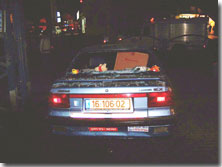 I still was not sure where the rocket had hit. As I started to look for my co-worker, I could hear men screaming their wife’s name and others yelling “efo…” which in Hebrew is “where…”, “where is my wife?” or “where are my children?” People were on cell phones either checking on loved one or checking in with loved ones. I saw my co-worker three isles to the right of the front door; she was O.K. Praise G-D.

The Kassam had hit no more then thirty feet from the front door of the market; no more than fifty feet from where my co-worker was standing at the time. There were nine cars damaged by the blast, a power pole damaged and three people evacuated to the hospital. There were more injured then three.

I realized today a little more of what the residents of Sderot have been going through. “Efo (Where) is my friend, all I see is black smoke coming from the market I left her in?” The feeling of not knowing where your kids or spouses are or what you will see when you make your way to the scene. Many people here don’t like going out and only go out when they absolutely have to… I understand that more today as well. All I wanted to do after the blast was to get my friend and go home, to get off the street, knowing another Kassam could be on its way.

We made our way to another market and picked up the things we needed, got back to our van and came home. We went to a friend’s house and I realized that two hours later my hands were still shaking. Not knowing about my friend, wanting to get home and my hands shaking after the blast, I realized that these brothers and sisters of Sderot have been going through this, day in and day out for eight years, eight years. Those of you who have been at war have some idea… I had no idea until I moved here… Am I ready to pack my bags and run… I also understand that for my friends who live here… this is home, I am blessed to be a part of this community and to call them my friends, my brothers and sisters.

The miraculous thing about tonight’s Kassam attack is it happened during a busy time at the market, when people would be coming and going in and out of the store – no one was killed. As long as you have hellish people doing hellish things you will have Kassams. We have no idea what is in store for us when the cease fire (if you can call it that) ends on December 19, but I am confident who holds our future in His hands.