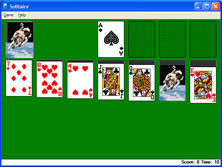 I was sitting here playing a game of solitaire, the cards were dealt and I had a lousy hand dealt to me two kings and the rest red twos and threes. As I turned over card after card there was nothing, just disappointment after disappointment. I thought it was time to restart the game.

Then all of a sudden an ace appeared. It was the right color and the right suet. The next thing I knew the small cards were replaced with more usable numbers and of different colors. A few moments later I had won the game. Everything fell into place even when it looked that there wasn’t any hope.

It reminds me so much of life, nothing is going right, the cards aren’t falling into place, what’s happening and where is GOD! Alex Seidenfeld is an 82 year old ultra-Orthodox holocaust survivor from Hungary. He is a person one would think would be bitter and mad at GOD and be asking “Where was GOD when this was happening.” His response to what happened was in the Jerusalem post today.

“We stayed alive. We survived. How could this have happened without the almighty?” said Alex Seidenfeld, an 82-year-old survivor from Hungary, who said he saw “miracles” unfold daily in Nazi concentration camps. “The almighty knows what he is doing. He has a plan that we sometimes don’t understand.”

That last sentence I think says it all and puts in to its proper prospective. “The almighty knows what he is doing. He has a plan that we sometimes don’t understand.” Job understood this principal when after a series of tragic event his family all dead, his 401K wiped out, livestock, everything gone, “arose, tore his robe, and shaved his head; and he fell to the ground and worshiped. And he said: “Naked I came from my mother’s womb, And naked shall I return there. The LORD gave, and the LORD has taken away; Blessed be the name of the LORD.” In all this Job did not sin nor charge God with wrong.

I don’t know what tomorrow holds, in fact I don’t know what the next 15 seconds hold (The amount of warning we get of an incoming rocket from Gaze.) “The almighty knows what he is doing. He has a plan that we sometimes don’t understand.” If I have a problem with His God ship then maybe I need to go back to the first commandment and realize just who is GOD.

I would like to share with you next time some thought on God ship and the first commandment that you might find interesting. Needless to say “The almighty knows what he is doing. He has a plan that we sometimes don’t understand.”