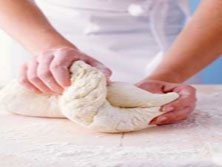 I was once told, “Without G-D we can’t, without us He won’t.” The partnership between G-D and man is limited, we perform the small tasks while G-D the majority of the work. We dig the ground and plant the seed, G-D does all the rest. With the exception of our occasional watering even then the water is supplied by rain water or snow melt off from G-D. G-D does almost everything!

Bread is an exception… In the journey from the field to our dinner table it requires a little more effort on our part. Of the thirty nine activities that the Mishna, (the rabbis writing and commentary on Torah) teach are forbidden to do on Sabbath, eleven are devoted to the preparation of bread.

“Sowing, plowing, reaping, binding sheaves, threshing, winnowing, selecting, grinding, sifting, kneading, baking….” Even though the seed, the earth, the sun and the rain are provided by G-D, the wheat that comes up from the ground will only be hay if man does not do his part.

Instead G-D chose to create an incomplete world in which we could if we desired to become His Partners, in which case He recreates us into His image to a greater degree. The world and everything in it belongs to G-D; that is what King David declared; making G-D the King, this earth His kingdom, and we are His subjects.

When we take our responsibility in this partnership and sow, plow, reap, bind sheaves, thresh, winnow, select, grind, sift, knead and bake (obviously not on Shabbat) we end up with beautiful, tasty, fresh bread. As a result of that bread we bless and praise His name; one of the primary reasons for our existence. The idea that He allows us to partner with Him is mind boggling and is in and of itself something to bless and praise Him for.

When the Children of Israel left Egypt, there is no record in Torah of anyone praising G-D. When the Children of Israel were between that rock and a hard place, when the Red Sea was split and once they were all on dry land the whole nation sings praise to G-D. Were the miracles in Egypt any less deserving of praise than the miracle of the splitting of the Red Sea? Both were the hand of G-D at work both remarkable and miraculous.

So why did everyone sing praise to G-D at the Red Sea? In Egypt, the miracles were brought on entirely by G-D, man had no involvement whatsoever. The people were passive: they listened, they heeded, and they waited. G-D Himself planned and executed the ten plagues that lead to the Exodus.

At the Red Sea, on the other hand, Moses and the children of Israel prayed; although G-D said this is not a time to pray but to start stepping out in faith. Moses did raise his staff, the peoples did have to take that first step of faith on the newly dried sea bed, they had to step into the partnership with G-D and do their part. The song of praise was sung when the children themselves had an active part in this miraculous event and not when they were merely spectators.

Let’s take a look at Mount Moriah and Mount Sinai. Mount Sinai was where divine revelation took place, where the Torah was received by the Children of Israel. As holy as what took place on Mount Sinai there was no active partnership between G-D and man. It was so much not a partnership that they were told to get off the mountain, “…Whoever touches the mountain shall surely be put to death.” (Exodus 19:12). Mount Moriah, on the other hand, is the Temple Mount, The place of the temple, the place of the Holy of Holies. Mount Moriah has been and will always be the sacred spot from which Jerusalem emanates.

Mount Sinai and Moriah are a picture of our partnership with G-D. At Mount Sinai there was no involvement from the children of Israel in the revelation of Torah their part was passive. G-D gave His Torah to us and when G-D takes over entirely, the holiness of that place is muted. In contrast, the holiness of Mount Moriah, the location of the Temple is the holiest place which can never be extinguished, in part by the partnership between G-D and man that has taken place there.

Abraham brought his beloved son Isaac to be sacrificed there, David made it the seat of the kingdom and his son Solomon had the first temple built there. Both required a partnership between G-D and man and to this day G-D is blessed on Mount Moriah and praise is sung to G-D as a result of that partnership.

The more we are involved, the greater the song of praise, the more we will bless G-D. G-D is always looking for those who want to be His partners. As you become His partner in this world you too will bless Him!