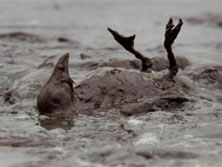 Is the world enduring now merely the fallout from a bunch of greedy bankers and mortgage lenders, corrupt politicians, and the long list of other miscreants? Is the unemployment rate in the US (published at 9.6 but some estimate as high as eighteen percent) as well as in the rest of the world a result of the same greed and corruption, or is it such a blatant wake-up call that we are missing it?

The BP Deep Horizon well “Blowout” (after all it is not a spill) is a result of big corporation greed, cost-cutting and government corruption, but is it more than that, is it another wake-up call we are missing or even a precursor to the messiah’s coming and to the end of time as we know it?

Surprisingly enough the Talmud, the books of Jewish commentary on Torah, talks about the things we are now experiencing. There is even a section written about this present BP situation.

Rabbi Hanina was of the first generation of the Jewish Tanna sages. He lived during the destruction of Second Temple of Jerusalem, and had testified, following that event, on something he had seen occur in the Holy Temple. Sharing his understanding on Ezekiel 32:14, he said the following:

“The Son of David will not come until a fish is sought for an invalid and cannot be procured, as it is written, Then will I make their waters deep, and cause their rivers to run like oil; whilst it is written, in that day will I cause the horn of the house of Israel to bud forth.”

In other words: when an oily film covers the water, fish cannot be caught in it – an anticipation of the havoc to sea life wrought in modern times by oil on the sea. He did not say all the seas, just sea.

Rabbi Abba was a third century Jewish Talmudist who lived in Babylonia. He was known as an “amora” (commentator on the Oral Law). He said concerning Ezekiel 36:8:

“There can be no more manifest [sign of] redemption than this: “But ye, O mountains of Israel, ye shall shoot forth your branches, and yield your fruit to my people Israel, for they are at hand to come.” When Israel becomes so very fertile, the Messiah’s advent is near, and there can be no clearer sign than this.

Rabbi Eleazar said: “Than this too, as it is written, ‘For before these days there was no hire for man, nor any hire for beast; neither was there any peace to him that went out or came in because of the affliction.’”, quoting from Zechariah 8:10. So now we have high unemployment not only in America but world wide.

No one can say exactly why this disaster has happened. We do know that it was man- made and not natural; but so was the tower of Babel and the subsequent mixing up of the languages because of a man-made building.

Because most of the situations the world is now facing are man-made, we seem to write them off, forget the fact that G-D will use His creation to accomplish His perfect plan. He has told us what would happen if we forgot him, if we forsake His commandments; He even went as far to give us signs along the way, signs that all say; “Turn Back”, “Wrong Way” , “Stop”. Just a thought, it seems the only sign we seem so see and to take heed to is the “Yield”.