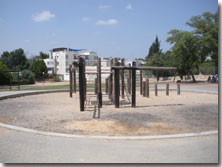 This week we had the joy to meet once again with the founder and director of the Almond Branch Initiative. They were in Sderot to make the final plans for a memorial park for Efek, Ruti‘s son, who was killed by a Kassam four years ago while on his way to his kindergarten graduation. In the same attack Ruti lost her right leg.

A few different groups over the past four years have promised or at least suggested to Ruti that they would build a memorial park for Efek, but to date nothing has ever been started… Until now.

In October, Jill plans to bring a crew of volunteers over from the states to accomplish this “Extreme Make Over”. New playground equipment, pergolas, picnic benches, landscaping and not only a plaque of dedication to Efek but plaques of remembrance for the other children killed by Kassams fired from Gaza; seven in total.

Our part in this project… we get to help with some of the prep work before the crew arrives as well as lending a hand where ever possible. For the Hope for Sderot family, it will be a labor of love for Ruti. She is a dear friend and it brings great joy to see this park come to completion so that closer for Ruti can begin.

Would you like to become part of this blessing, to make a statement of support for Ruti and the children of Sderot? We are hoping to plant a “Hope Garden” within Efek’s park; nothing big or elaborate, just an area of flowers and shrubs to bring some color and life to a small corner of the park and to augment what the Olive Branch Initiative is doing.

Bedding plants cost less than a dollar a piece, shrubs and rose bushes are five dollars each. What will you get in return for your gift of love to a mother who has lost her son?… only one thing… personal satisfaction. There won’t be a plaque with the name on Hope For Sderot, or a little sign by the plant you help purchase, no fancy “suitable for framing” letter of recognition.

If you find it in your heart to be part of this contribution from Hope For Sderot to the Olive Branch Initiative project, you can send your gift electronically by clicking here or to the mailing address below.

“To console those who mourn in Zion, To give them beauty for ashes, The oil of joy for mourning, The garment of praise for the spirit of heaviness; That they may be called trees of righteousness, The planting of the LORD, that He may be glorified.” Isaiah 61:3