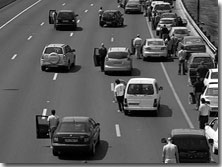 At 8 p.m. Monday night, a siren ushered in memorial services throughout Israel. Across the country everything came to a standstill as we all stopped whatever we were doing and stood still

for two minutes in memory of those who have fallen defending this country as well as for those who have been killed by terrorists. All flag were lowered half-staff and the honor guards came to attention.

The siren pierced our hearts once again on Tuesday morning at 11 o’clock. Again, everything came to a standstill as we all stopped whatever we were doing and stood for two minutes in memory of those who have fallen defending this country. To date 22,576 men woman and children have fall in the defense of Israel. We had a chance to spend some time with Juliet and her family as they gathered to remember there son, David, who died in the line of duty in Lebanon fifteen years ago.

Independence Day celebrations began at 8 p.m. Tuesday night. For many, the transition from somber commemoration is jarring. First to remember those who made it possible to stand here and celebrate was fitting before the next two nights of celebrating.

The main street in Sderot was closed to traffic.  Concession stands and toy booths lined the street. Kids were out having a good time running and playing, spraying silly string all over each other. As the sky was lit up with fireworks, the young adults were gathered around live concert stage listening to the live music and watching Israel’s version of American Idol contestants.  Needless to say, a good time was had by all.  The biggest thrill that was not expected was to see Matan walking the streets without the help of any type of crutch, just having a good time with his friends; talk about a heart full of joy…we were elated.

So we remembered those who gave their lives, celebrated what they died achieving; and yet all thanks, all praise must go, has to go to Ha’Shem for without His hand of protection, His promises He made to Abraham, Isaac, Jacob and their descendants, none of us would be here today.