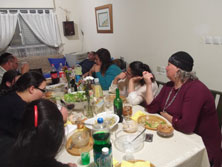 On Monday the 15th. of April  we celebrated 65 years of Israel being a state. We invited family over to the house for dinner. It was going well, everyone was enjoying themselves. There was food, laughter, fun and more food.

Around 10 O’clock we heard booms and popping noises, the fireworks had begun. The firework display could be seen from my living room and bedroom windows. The kids ran to the window and they were oohing and awing as the night sky was illuminated with the red, blue, silver and gold from the fireworks.

Then there was a loud boom. It sounded just like a Kassam exploding. With that all the kids jumped as well as  their mothers. As the kids ran from the window one of the fathers told the kids it was nothing more than the firework. Then there was another and another and the kids started to scream from fear.

For the next thirty minutes as the sky continued to be lit up there would again and again be these real loud booms. Piglet, my cat ran to the bomb shelter with the very first boom and stayed there until the fireworks were over. What’s interesting is that over the three years I have had her she has seen me run to the bomb shelter so many time that when she hears a loud boom she runs there too and tonight was no exception.

One of the children never went back to the window to watch the rest of the fireworks; she stayed on the opposite side of the room next to her father. One of the mothers was so scared that she called the police and the mayor’s office to see if they could make them stop.

I was waiting for the grand finally. This year it must have lasted for a good ten minutes Boom, boom, sparkle sizzle, it was wonderful. By the end of it however two of the mothers were standing looking for a place to go , their children were all screaming and you could see and feel the anxiety level . You could see the fear on their faces as they had been traumatized by the explosions from fireworks.

Even though we knew they were fireworks, the booms were so strong that they sounded just like a Kassam and the kids and parents weren’t able to get past the sound that they have lived with for the past twelve years.

Something that should have been fun and exciting for the children and parents of Sderot was fearful and scary, that’s deep is the trauma is to the citizens of Sderot.