Moti, Our good friend and one of our first volunteers, normally does not work on Fridays but last week he did. As he got off the bus near his home he stopped to light a cigarette and started to cross the street. The next thing he knew he was flying through the air; he had been hit by a car.

Because of the location of his bus stop and the fact that is was Friday afternoon there was little traffic on the street. He laid in the street bleeding for twenty minutes until a passerby found him.

At the same time the passerby found Moti, Motie’s wife called him to see where he was because he should have been home by now. As his cell phone range the lady that found him picked up the phone and “My Wife” appeared on the phones screen; She answered the phone and told his wife what happened.

His wife ran down the street to find Moti unconscious, bleeding and with his left leg bent in a way it shouldn’t be; she though he was dead. The police and ambulance arrived and he was rushed off to the hospital.

Moti is now home with a cast on his left leg, eight staples in his head and a shoulder that is broken in three places. For now he is bed ridden but with the help of his son his needs are being taken care of. 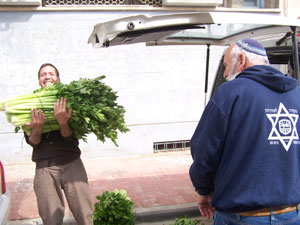 What the police are trying to determine now is, was this a hit and run or a terrorist attack. Whatever they determine will not change the fact that the bread winner of the family is now on his back in bed. Unemployment insurance, once it kicks in, three to four months from now will help them, but for now they are between a rock and a hard place.

Moti had a doctor’s appointment at the Hospital today. Because of his broken leg and shoulder he had to be taken to the hospital by ambulance. The trip to and from the hospital is not covered by his insurance so they asked if we could help.

Through your love and concern for the people of Sderot we were able to cover the cost of the ambulance for him. He will need to go back to the hospital again in two weeks and we are hoping to be able to help if they ask. His next doctor’s visit will determine if he needs surgery on his left leg.

If you find it in your heart to help this family, just click here. One hundred percent of whatever you send for him will go to him. A copy of a signed receipt from him will be gladly sent to. Thank you for your support.