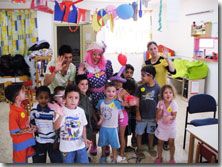 Happy the clown made it to Sderot Sunday afternoon. Monday, she started bringing smiles to the children and adults alike here in Sderot. The previous seventeen days she preformed in an orphanage, hospitals and at a Sudanese refugee camp. Now, she is spending the next nine days here in Sderot.

Everyday is booked. Her first show was at the children’s play area complex, a new 21,000 square foot Kassam safe facility. Happy preformed magic tricks, made animals out of balloons for all the children and pulled, not a rabbit out of her magic bag but rather an Israeli flag.

Young and old had smiles on their faces and a good time was had by all. Only one small incident happened… 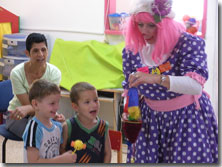 as one of the balloon animals popped, two small children started to cry and run for the bomb shelter. Their dad reassured them that everything was all right as he brought them out of the safe room… It goes to show just how effected these children are from a life time of Kassam rockets being fired at them. Children under nine years old only know a life with “Tseva Adom” and Kassams exploding.

Tuesday, she was off to the hospital to bring smiles to the kids there. She made stops in two different wards blowing up balloons and bringing smiles to everyone that met her. One of the first children she met was Noam, an eight year old boy who was in the hospital the same time Kobi was. It took many magic tricks and one balloon made into a dog to finally get a smile from Noam… But Happy got it! 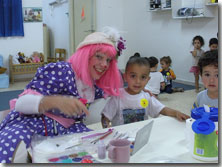 Why don’t the lions in the circus eat the clown??? They taste funny!!!

Wednesday, she was off to a day care center where she entertained the children once again with magic tricks, more balloons, face painting and even told the story of Noah from her magic bag. Thursday, she took the day off from clowning to help deliver food but even then she blew up balloons for everyone she met.

By Shabbat, Happy was ready for a rest. Sunday, she is scheduled to make a stop at the senior citizens community hall and bring smiles to those older kids at heart. From the first performance Happy brought smiles to the children 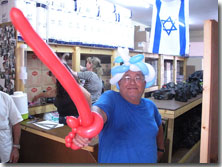 of all ages here in Sderot, smiles that had she not come would not have been seen. She brought joy and happiness and she shared the love she has for the L-RD G-D of Israel and His children with us all.

May the same joy and love she brought to Sderot fill her life, her family and may there be a blessing poured out from heaven that she can not contain; may that same joy follow her until she comes back to Israel, to Sderot again.