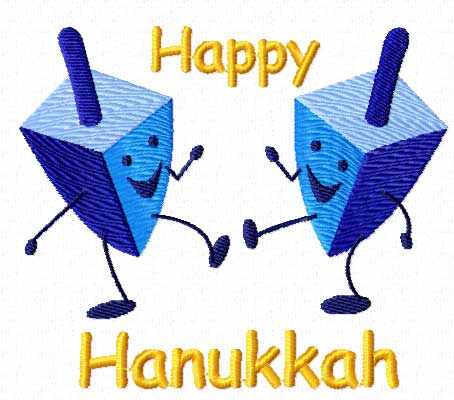 Although both holidays fall in December and some believe that Hanukah is a Jewish equivalent to Christmas, this is not the case. The story of Hanukah goes like this… About 2200 years ago, Greek kings, who reigned from Damascus, ruled over the land of Judea and the Jews living there. Antiochus Epiphanes forbade the Jewish people from praying to their God, practicing their customs, and studying their Torah. Antiochus forced the Jews to worship the Greek gods. It is said that he placed an idol of the Greek God Zeus on the alter in the Holy Temple of Jerusalem.

In response to this persecution, Judah Maccabee and his four brothers organized a group of resistance fighters known as the Maccabees. They fought against paganism and oppression.

The tenacity of the rebels, which came from their steadfast faith in their one God, is one reason this military victory has been so celebrated by Jews in future generations. In one battle near Beit Horon, Judah’s small army is intimidated by the size of the enemy army and Judah tells them to have faith that God is on their side.

But when they saw the army coming to meet them, they said unto Judah: “What? shall we be able, being a small company, to fight against so great and strong a multitude?” And Judah said: “It is an easy thing for many to be shut up in the hands of a few, and there is no difference in the sight of Heaven to save by many or by few; for victory in battle standeth not in the multitude of an host, but strength is from Heaven. They come unto us in fullness of insolence and lawlessness, to destroy us and our wives and our children, for to spoil us; but we fight for our lives and our laws. And He Himself will discomfort them before our face; but as for you, be yet not afraid of them.” (The First Book of Maccabees)

Against great odds, after three years of fighting, the Maccabees succeeded to drive the Greco-Syrians out of Judea. Hanukkah proclaims the message of the prophet Zachariah: “Not by might, not by power, but by My spirit.”

The Maccabees reclaimed the Holy Temple in Jerusalem. They cleaned the Temple, removing the Greek symbols and statues. When Judah and his followers finished cleaning the temple, they rededicated it. On the 25th day of the month of Kislev in 164 BCE, the Temple was purified and rededicated.

According to tradition, when the Maccabees entered the Holy Temple, they discovered that the Greco-Syrians had defiled the oil which was used in the Temple’s menorah. Only one vat of purified oil remained – enough for only one day. It would take the Jews a week to process more purified oil. Then a miracle occurred. The Maccabees lit the menorah and it burned for not one, but eight days, by which time the new, purified oil was ready. This is why the Hanukkah Menorah has eight candles (not including the Shamash candle used to light the others) and one reason why Jews celebrate Hanukkah for eight days.