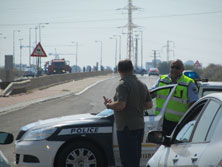 As we were driving down to Beer ‘Sheva today to spend some time with friends, thoughts of what has happened here in the last twenty four hours were going through my mind. I realized now, that there could now be a terrorist or a group of terrorests hiding in any one of the clusters of trees along the road.

As a car approached me on the left the thought came to me that there could be terrorist in that car and a RPG could be fired at my car, as what happened just two day ago on the road to Eilat.

It is one thing to always be on the lookout for the next place you can go run to when you hear “Tseva Adom” here in Sderot, but to realize that now when you get into your car and drive to the next city there is a possibility you won’t make it, is now a new reality and in that, the terrorests have won.

We got a late start today and in some small way it was a bit upset over that. I have learned over the years that seldom am I really late but that rather my timing and the timing of G-D don’t use the same watch.

At that point I suspected something must have gone “Boom” up ahead of us. Sure enough a Grad rocket had been fired from terrorests in Gaze and it had landed and exploded just minute’s before. 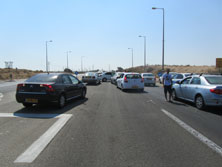 Some of the people waiting at the road block decided to take a dirt road around the scene of the terrorist attack. Some times G-D puts up a road block for us. This was the most literal and visual road block He has ever put up! I turned the car around and went home, only to read…

The Hamas rulers of the Gaza Strip announced early on Saturday they were no longer committed to a more than two-year de facto truce with Israel since the end of a war in early 2009.

The statement was broadcast over a Hamas radio station and Israeli new papers after Israelis responded to the rocket salvoes and attacks that started on Thursday that killed eight Israelis.

“There is no longer any truce with the enemy,” the statement said in a move seen as paving the way for Hamas to escalate the violence with Israel.

Let’s be honest: The so-called ‘truce’ (notwithstanding the 850 rockets and mortar shells fired during the truce and the now eight dead) ended after the unprovoked evil terrorist attack on Israel two days ago. They have absolutely no interest in peace with Israel anyway.