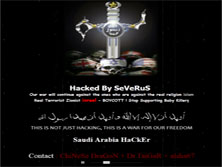 Last week I received an e-mail from one of our supporters sadly informing us that our website had been hacked. I have heard about hackers but never thought this website would ever be a target of Islamic hackers. After all what is Hope For Sderot that it would attract such attention… I guess I was wrong.

I went to the site and sure enough there was this picture posted over our homepage and an Islamism, jihadist song playing in the background. My first response was “What do I do now?”

With an e-mail off to our server provider and a second one off to our webmaster, I went to one our volunteers to ask them to come see what had happened. Immediately I received a reply from our webmaster stating, “It looks good from here where did they hack in?” At the same time Linda came in to see the site and it was not there anymore.

I knew I saw what I saw and it that it wasn’t a result of eating too many shawarma the night before. I then received a second e-mail with the same message… “You have been hacked.” This time they sent me a screen shot.

The fact of the matter is we stand with Israel. We bring a message of love and hope to the children of Israel we serve. We are not political in any way but we will give you an accurate picture of what life here in Sderot is like and the effects of eleven years of Kassam rocket attacks on her residents.

Within five minutes the problem was solved and we were back online. At first I thought what a terrible thing… now I see it as a compliment as we continue to share the news from Sderot and the stories of those we serve.