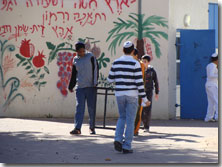 Going to school for most kids is a challenge: keeping their grades up, doing their homework and juggling all that with adolescents. The young people of Sderot face other obstacles as well…

The religious high school for boys is in the center of town. There are one hundred and seventy five students that attend class there each day (in Israel school is six days a week). This is the school we supply food for and beverages to and where Marco makes sandwiches everyday. 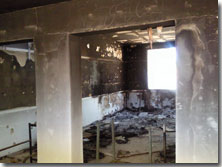 In the past few years, three Kassams have hit the school and one hit just right outside its main entrance. One of the buildings took a direct hit during school time. Baruch Ha’Shem (Praise G-D) the kids that normally would have been in that class room were returning two minutes late from their Torah study class on the other side of the campus.

The other two landed outside the classrooms, once again, “Baruch Ha’Shem”, no one was physically injured. G-D has had His hand on these kids of His! Part of the school is a two story structure and because of the Kassams and because the school is not a “Safe Building” (with reinforced concrete roofs and wall); the second floor is no longer being used. The other classrooms that were damaged have been abandoned as well. Instead, they have brought in five Bomb shelter type class rooms. 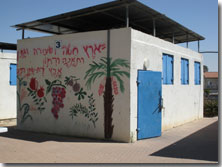 These classrooms have no windows and one or two steel doors. Their size is approximately fifteen feet by twenty feet or around three hundred square feet. Each classroom houses between twenty and twenty five students, conditions that would be totally unacceptable in the states. Presently, there is a new school being built, but it will be a while before it is completed. So for now, and for the students of the religious school, this is just the way it is.