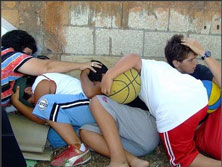 Once again we are facing an escalation of terrorist rocket attacks here in southern Israel. By the time this report is completed the number of terrorist attacks will have change, but as of 11:13 P.m. on Wednesday the 20th of June there have been some 58 rockets, mortars fired at us. (By the time this news update was sent out the rocket count was over 100). The sound of tank fire was hurt through out the day and into the evening.

People have been advised to stay within the fifteen second distance to their bomb shelter and school has already been canceled for Thursday. A barbecue we had scheduled for some visitors from the states had to be mover to a different location because there was no bomb shelter at the first location. It was a good move on our part; we had to use the bomb shelter during the barbecue.

Once again here in Sderot we saw the too often scenario played out. Children who are playing outside, frozen in their steps, as the Tseva Adom alarm sounded. Some were crying as they stood outside not knowing where to run. It is no wonder that parks here are empty. 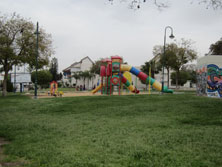 What would you do as a parent? One of you kids is outside playing; you and your other two kids are in the house. The “Tseva Adom” alarm goes off… What do you do Mom, what do you do Dad?

If you go after the one outside you run the risk being hit by the incoming Kassam and possible leaving your two children inside, to grow up with only one parent or you possibly spend the rest of your life wishing you had gone for your child outside… What would you do?

Do you understand this reality parents have to face here in Sderot each and every day? Is it any wonder why many parents who can’t cope with having to make that decision in a split second do not let their children play outside any more?

Mom, Dad; when you send your son or daughter off to school in the morning what goes through your mind when you know that the terrorists in Gaza pick curtain times during the day to fire their rockets at you… and the hours when children go to school is one of those target times? 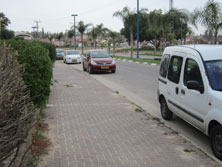 The other time periods they target is around two in the afternoon… the time kids come home from school or in the evening when Mom and Dad are coming home from work and or from the evening shopping? The two terrorist attacks we experienced on us today came at these times.

Is it any wonder that kids ten and thirteen years old are wetting the bed at night or sleeping with mom and dad because of fear? Do you understand why parents can’t go to work or loose their jobs because they just can’t cop with this stress that is in their lives?

They talk about people living in Sderot suffering from PTSS (Post Traumatic Stress Syndrome)… the problem is, there is nothing post about it. This stress has been going on for the past twelve years and once again today it was brought to the fore front of every man woman and child’s mind.