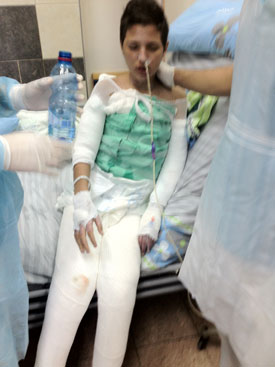 From Bad To Worst

Almost three years ago I started to write a story about a family we were helping with food at the time. For some reason the story was never published and I am not sure why that happened; it might have been held up because I needed some pictures to go along with the story, which I now have.

The original story was about a single mother and her son who was badly burned.

Eti met Avi’s aunt on the way to her apartment and Eti told her that she had some food vouchers for the family and that she was concerned because she had not seen her in a while. That was when her sister told Eti that Avi’s mom had died a few months ago.

Now with no mother and Avi still suffering from his burns their oldest brother took on the responsibility for Avi and his two other siblings. There is some governmental help for the kids but that is bare bones help. The extra help to take care of Avi’s needs is still not there and like I said the burden of the family now is on the sholders of the oldest brother, a high school senior.

Once again we will make sure they will get food every month, which will help some but it is far from the help they need. After you read the original story and would like to help this family you can click on this link or on the link in the original story… and now Meet Avi from the first story…

Aviv’s mother has been single parenting for some time now. We are able to help her with food. Back in February of 2012 she stopped coming in, the reason… her son was in the hospital; he had been burned.

It turns out that 15 year old Aviv and a friend were out doing what 15 year olds do. Part of that involved a plastic bottle they were kicking around that had acetone in it. As the bottle got kicked it started to leak. Aviv’s friend decided to throw his cigarette at the leaking bottle. When he did the bottle exploded sending a fire ball through the air, hitting Aviv, catching his cloths on fire.

Aviv’s mom got a phone call from a neighbor telling her of what had happened; with horror she said “it can’t be it can’t be my son.” Minutes later she received a call from Aviv from inside the ambulance he told her “Mom help me, come help me!” and then he passed out. 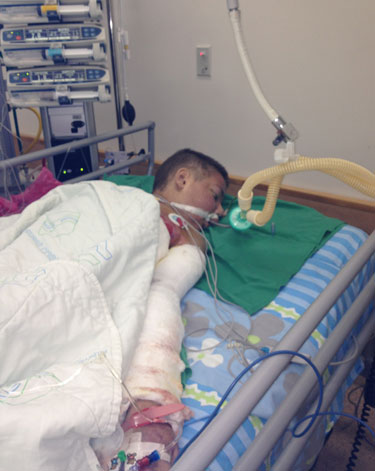 When I met Aviv the first thing I noticed was not his burned body but the beautify smile on his face. He was burned from the arm pit down, except for a small patch by his lip. One of the first questions I had to ask him is “with all that has happened to you how can you still smile”?  With that same smile he told me about what the doctors said, that if he lived though the first night in the hospital it would be a miracle and because of that he has a lot to be thankful for and to smile about.

It has been months since he was last outside in the sun. He has not been attending school because he cannot be exposed to sun light. During the heat of this summer the air conditioner has to be on for him all the time as the salt in his sweet causes a burning to his sensitive skin.

Aviv needs to wear a specially made protective suit that needs to be replaced every six months. This suit helps protect his skin and helps keep the swelling down. There is a special prescription burn and other pain medication he uses as well on a daily basis.

When I first heard of this story I told Aviv’s mother that I would be more than willing to write a story about them and post in on our web site. As always I told her that I could not promises her anything but would pass on to her any gift that would be sent to help them.

If you would like to help Aviv and his family you can do so by clicking here. One hundred percent of what you send will be given to Aviv and a signed copy of our benevolent gift form from them will be sent to you. If you have any other questions about Aviv you can contact us by clicking here.