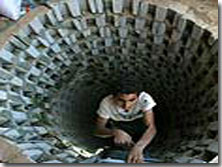 For the first time in over a month, Palestinian terrorists on Thursday evening fired a Kassam rocket into southern Israel. The rocket landed in an open area in the Sdot Negev region and did not cause any physical casualties or property damage. The previous rocket attacks on the southern Negev came in mid June, when Palestinians fired two projectiles in a 24 hours period. The first rockets that were fired in June were answered with an IAF air strike on smuggling tunnels.
Smuggling tunnels are being dug deeper today to be able to go undetected by the IAF. The saddest part of these smuggling tunnels is that in a recent study by the Palestinian Centre for Democracy and Conflict Resolution showed that more than half the 16,000 people working in the tunnels are under 18. The job is comparatively lucrative, with children getting up to 30 dollars for a 12-hour shift. “I have six brothers. I’m the breadwinner for the family,” says 15 year old Anwar. He says he doesn’t mind not getting an education. “School is useless.” He says he doesn’t worry about the Israeli air strikes either. “The Jews are our enemy. I’m not scared of them.” As long as Hamas’ hatred towards the Jewish people is greater then their love for their children the “Anwars” of Gaza will risk their lives to build smuggling tunnels.