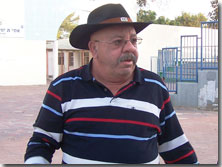 Marko was a truck driver. He picked up shipping containers from the port in Ashdod and delivered them. In June of 2007, he picked up, what was supposed to be an empty container to deliver. Unknown to him or the port authorities was that this twenty foot container had a false front wall built in it with six terrorists hiding in it. When Marko opened the container doors, the terrorists jumped out and killed ten and wounded seventeen of his co-workers. Shortly after this incident, Marko retired and became a school guard here in Sderot.

In the course of the day, as Marko guarded the entrance to the
school, he noticed that there were some kids at lunch time that had nothing to eat. As Marko sat in his guard shack, eating his lunch, one of the kids came up to him and asked if he could have just a bite of his sandwich. The next day, Marko brought a few extra sandwiches with him to give away.

Today, Marko makes fifty sandwiches a day and gives them to the kids that come to school with no lunch.  He gives chocolate milk and bread for those who come without breakfast as well.

The quantity of food he has been buying has put a hardship on his own budget. I need to stress that Marko did not come to us to ask for help. We were told of Marko from a social worker here in Sderot. In fact, Marko told us that whether we help him or not, he will continue to feed the children. After meeting with him this past week, it is our desire to help him with tuna, chocolate spread, chocolate milk mix and fresh bread to help feed these kids. To help support this program click here