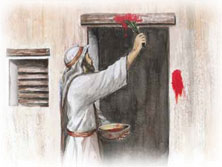 We are told that the elders of Israel were to take a lamb, slaughter the pesach-offering (Passover offering) and take a bundle of hyssop and dip it into the blood that is in the basin, and touch the lintel and the two doorposts with some of the blood and that no man shall leave the entrance of his house until morning.

If you were in the house until morning and the blood was on the outside; how could the blood be a sign for the children of Israel who were on the inside? May I offer to you that the blood was also on the inside of the doorpost and lintel as well? How can that be when verse 23 says,

If an Egyptian happened to be the first born and heard of his pending fate that night, decided to duck into a house that he saw was marked with blood on the door, do you think he would be saved? Does G-D just look on the outside and not on the inside as well? For many, they believe G-D only looks on the outside and how I portray myself to others is how He sees me… He is looking on the inside as well, where is the blood on the door post of my heart?

Passover, a time to remember the blood that was applied, that special night from every other night, that saved us from death, that saved us from the destroyer and enabled us to leave a life of slavery and bondage, to be set free and to begin our journey to the promised land flowing with milk and honey.

“For I know the thoughts that I think toward you, says the L-RD, thoughts of peace and not of evil, to give you a future and a hope.”