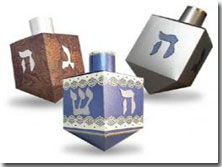 As the song goes: “I have a little dreidil I made it out of clay and when its dry and ready a-dreidil I will play.”
A dreidel is a four-sided spinning top, played with during the Jewish holiday of Hanukkah. Each side of the dreidel bears a letter of the Hebrew alphabet: נ Nun, ג Gimel, ה Hei, and ש Shin, which together form the acronym for “נס גדול היה שם” Nes Gadol Haya Sham – “a great miracle happened there”. In Israel, the fourth side of most dreidels are inscribed with the letter פ Pei, changing the acronym to, נס גדול היה פה, Nes Gadol Haya Po—”A great miracle happened here” referring to the miracle occurring in the land of Israel.
These letters also form the rules of the game played with a dreidel: Nun stands for the Yiddish word nite (“nothing”), Hei stands for halb (“half”), Gimel for gants (“all”), and Shin for shteln (“put”).
Each player begins with an equal number of game pieces (usually 10-15). The game pieces can be any object, such as pennies, raisins, or gold foil covered chocolate. At the beginning of each round, every participant puts one game piece into the center “pot”. In addition, every time the pot is empty and sometimes if it has one game piece left, every player puts one in the pot.
Each player spins the dreidel once during their turn. Depending on which side is facing up when it stops spinning, they give or take game pieces from the pot: If nun is facing up, the player does nothing. If gimmel is facing up, the player gets everything in the pot. If hey is facing up, the player gets half of the pieces in the pot. (If there is an odd number, they get half of the total plus one) If shin (or peh) is facing up, the player adds a game piece to the pot. If a player is out of pieces, they are either “out” or may ask another player for a “loan”. The one that has the most candy at the end is winner.
Sit down as a family and give it a spin…try it you’ll like it? Besides when you win this game the victory is so much sweeter!