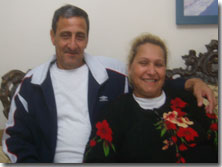 In January 2005 the Wknin family received a phone call from the police in Sderot, “Kobi was injured by a Kassam and it doesn’t look good.  Mayir, Kobi’s father  left their Holon home  and headed to the hospital in Be’er Sheva, about a hour and half drive.  He recalls it was raining that day and it seemed like it took forever to reach his son.

Once at the hospital he was told that his son was in surgery and they were trying to stop the bleeding. As Mayir was waiting, out from the operating room came a gurney with a body that was covered with a sheet.  Mayir recall thinking “that is my son he’s

dead.” The thought of loosing his son was so great that this 56 year old father fell to the floor…he had a heart attack. Mayir was now being rushed into the emergency room.

Fortunately the patient that was covered with the sheet was not his son, but he would have to wait to hear that good news. Meanwhile back at the Wknin  home in Holon,  Kobi’s mother, Sonia, receives another phone call from the hospital. Not knowing what news she would hear about her son, was not ready to hear her husband  just had a heart attack and was in surgery.

Sonia, with no immediate way to get to Be’er Sheva collapsed to the floor of their home in horror of what the day had brought.  Mayir recovered from his heart surgery, Kobi would recover as much a possible from the terrorist attack ( although is permanently disabled)  but not until Sonia would spend the next year and a half going to the hospital each day to care for her son.

This same scene has been replayed here I Sderot for the past eight years as terrorists from the Gaza fire  Kassam rocket with the sole purpose to kill and do as much  physical and psychological damage to innocent men women and childrenas possable.