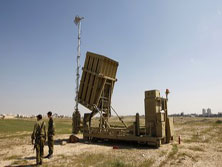 In the midst of the recent rocket attacks on southern Israel the Iron Dome has preformed wonderfully and has intercepted eight incoming rockets as the developers had hoped for. It has brought some relief to those communities that it protects.