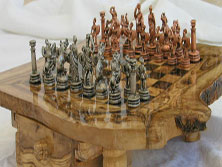 Iran does not need to get a single nuke out of the silo or off the ground, which if they did would not go undetected and more than likely could be shot down either by Israeli or American anti-missile weaponry.

Mahmoud Ahmadinejad would be more than happy to sacrifice millions of his own countrymen in order to kill hundreds of thousands of Jews. For him to get Israel to the point of launching a preemptive strike, even though he never gets a payload to Israel, He still gets a destructive payload of conventional weapons delivered to Israel by his surrogate states.

Israel would have its hands full with what could be an onslaught of Kassam, Grad, Mortars, Katyusha and Scuds fired at her by her neighbors in retaliation to an Iran attack either by Israel, the US or a coalition of countries. No matter who leads the attack on Iran, it will be played out as Israeli’s fault and Israel will pay the ultimate price.

Since the 2006 Lebanon war there has been one report after another that Hezballah has restocked and refortified its military with weapons smuggled into Lebanon through Syria from Iran. Syria has built up its reserves with weapons from Iran as well. Hamas in Gaza has not lost any time during this past year’s cease fire, smuggling bigger and better armament and now has rockets that can travel 60 kilometers, which puts Tel Aviv in striking distance from the south.

What does this mean for Israel? Even with the mid 2010 launch date of the first “Iron Dome” system along the Gaza border, an onslaught of rockets from three different sides all at once may prove more than the Iron Dome can handle.

IDF Head of Operations, Brig. Gen. Aviv Kochavi, said that some Hezballah rockets now have a range of more than 150 miles — making Tel Aviv reachable from as far away as Beirut. Israeli officials say Hezbollah’s most potent weapons include about 500 Iranian Zilzal guided missiles, with ranges of 77, 136 and 186 miles.

In addition, they say Hezballah has 4,000 to 6,000 Iranian Fajr 3 rockets; an artillery rocket that has an estimated range of 45 kilometers or 25-30 miles, and Fajr 5 rockets, which have a range of about 75–80 kilometers. In totality The IDF estimates Hezballah has about 40,000 rockets of different sizes and types and the stock pile is growing daily.

Nuclear Iran is one threat but maybe the bigger threat is the ever growing stockpiles of conventional weapons by Israel’s neighbors; the scary thing is they are not afraid to use them on Israel.

Is Mahmoud Ahmadinejad’s rhetoric and defiance to the UN and the rest of the international community an effort to egg Israel into a preemptive strike so Iran’s puppet nations can launce a conventional attack on Israel, while all the time yelling “self defense”?

Make no mistake a Nuclear Iran is a threat to Israel, the Middle East and the rest of the world. I was reminded that the game of chess found its roots in the Middle East. Did you know the word “Mate,” as in “Checkmate” is Arabic and means “died”, “is dead”?