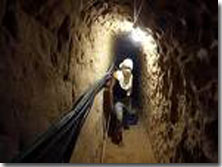 Smuggling tunnels are still being built, weapons and supplies are still making there way to Gaza. Hezbollah’s leader, Hassan Nasrallah admitted that the Lebanese terror group was smuggling arms into the Gaza Strip through Egypt. Yet an Egyptian official said Saturday, “Egypt is not a building without a doorkeeper,” But yet arms, supplies, RPG’s and rocket components are still making their way to the Gaza. “Maybe the doorkeeper is asleep?” Avagador Avshalom, a Sderot resident said. “Or maybe they are talking out of both sides of their (Egypt) mouth.”

Although it has been “reasonably” quiet for the past few weeks; Baruch Ha’Shem, the fact of the matter is these weapons and supplies to build bigger and better rockets for the terror groups to use against innocent men, women and children of Israel are still making their way to the Gaza – why and what for?

“Hudna” (what we translate in the west to “cease fire”) is the temporary laying down of weapons only so you might pick them up on another day and come back stronger than when you laid them down. We are not in a cease fire.  We are in a Hudna and there is a big difference.

For the residents of Gaza, approximately 1.5 million, the Hamas smuggling tunnels have also become a main source of food and goods, only to strengthen the Hamas foot hold. If you cooperate with Hamas, you will receive food from them, if not you get nothing. If you store weapons in your home they will feed you, if not, go hungry.

How do you deal with or even negotiate with a terrorist group that values death more then life, that believes they must kill all the Jews in Israel (little satan) and all the Christians in America (big satan) before their twelfth Emom, their messiah will come? Until Hamas loves their children more than they hate the Jewish people, there will be no peace.