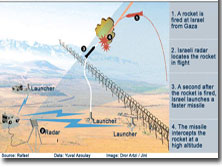 Once again this past week there was little in the Israeli news concerning the proposed cease fire between Hamas and Israel. There is though the continued defamation of Israel and its part in this past war with Hamas.
UN Special Reporter Richard Falk charged Tuesday that Israel’s military incursion into Gaza “was not legally justified given the circumstances and diplomatic alternatives available, and was potentially a crime against peace.”  Falk argued further that Palestinian rocket fire into Israel had been mostly a retaliatory act.

Military Intelligence Chief Amos Yadlin said Operation Cast Lead strengthened Israel’s deterrence vis-a-vis Hamas and that rockets lately fired at Israel were fired by other organizations and that Hamas was working to force these organizations to stop firing rockets.
He assessed that Hamas was preparing for another round of fighting. “Hamas did not give up on its ideology of resistance. It is preparing itself for another round of fighting and will therefore never sign an agreement to stop weapons’ smuggling. For Hamas, smuggling is the resistance’s main option.”
The UN is still siding with Hamas; Hamas refuses to agree to stop arms smuggling; Hamas has not changed nor is it willing to change its charter, to recognize Israel and their right to exist, nor are they willing to  lay down there arms once and for all and to let the peace process move forward. As I am writing this and as you are reading this, Hamas is re-building, re-training and re-stocking for there next round of terrorism and fighting with Israel.

Since Israel’s cease fire with Hamas, over one hundred and two mortars and rockets have been fired at innocent residents of southern Israel; number one hundred and two was pointed at Sderot and at approximately nine forty five on Tuesday morning the city warning system once again sounded “Tseva Adom” It broke the nineteen day silence since the last attack on Sderot.