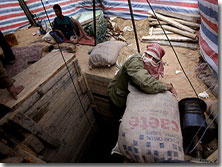 We woke up twice this past week to early morning ‘Tseva Adoms”. As the cease fire negotiations continue, so do the Kassams. It makes one stop and wonder if during this new cease fire, “will things be just like they always have been – terror attacks continuing on without end?” The conditions for a cease fire are agreed upon and Israel stands by their word and the document they sign, but the Hamas governing party still does not put an end to the Kassams. Oh, there might not be twenty a day, but may be only two a week, just enough to keep the people in Sderot and her surrounding areas wondering “What has changed?”
When you read articles from the Jerusalem Post on this, it does not give you great peace… “The IAF bombed targets in two places in the Gaza Strip on Friday. Overnight, two weapons manufacturing facilities were destroyed in an aerial attack in the Jebalya refugee camp in the northern Strip”. Why, if there is an eminent cease fire, are rockets still being built? I have never known of a weapon that man has made that has not been used! Again I must remind you that the word “Cease Fire” is an English translation from the Arabic word “Hudna”, which is a temporary “truce”.
Nine months ago Hamas was only able to fire rockets at Sderot. After six month of Hudna-a cease fire, (with many rockets still being fired into Sderot) Hamas was able to reach Be’er Sheva, Ashdod and Kirat Gat. How far will Hamas be able to fire rockets after an eighteen month Hudna; Tel Aviv? Or Jerusalem?
As we look forward to a cease fire, and we follow the progress in the news, what is one to do with reports like this?… “Egyptian state-run newspapers Friday quoted Egypt’s top mediator, intelligence chief, Omar Suleiman, as saying that four obstacles remained to be resolved; ‘firing rockets; establishing a buffer zone between Gaza and Israel; a Hamas commitment to respect calm; and a halt to weapons smuggling’ into the Gaza Strip”. Firing rockets and smuggling weapons are obstacles to a cease fire? I thought that was what the cease fire was about!
I know I’m not the sharpest knife in the drawer and the reason I graduated high school was because they did not want me there one more year, but am I missing something here? Read the Hamas charter and see for yourself why nothing will change. Nothing will change until the hearts of Hamas are touched and changed.  Until then, it will be one Kassam after another.