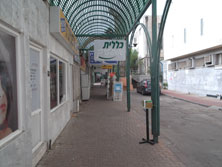 As we drove from home to Hope For Sderot’s storefront it was eerily feeling as we drove down empty street, sidewalks and parks were void of people. It looked like Shabbat yet there was no Shalom.

As I made my way to our front door where there are always people there was one or two. The bank and main post office that is next to us was empty… People just aren’t going out.

We need to go to the toy store to finalize our purchase for our Hanukah party on the 9th. December. While there, three Kassams fired at us. As we made our way to the back of the store to get as far away as possible from the storefront glass you could see the girl that works there was scared.

I would be lying if I told you I am not scared and if you asked anyone here in Sderot they all would tell you the same. Those who have been in war or have come to Sderot in the past to volunteer can relate. Yet we continue to live, to press on and sometimes it is very difficult to go outside but we do. 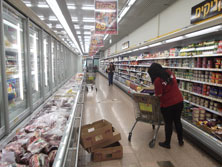 As we made our way to the market to do some food shopping the first thing I noticed was one of our favorite coffee shops was closed. As I looked around Ace hardware was closed, and the book store and the sushi restaurant; in fact out of the fourteen shops in that one center eleven were closed.

In part they are closed because no one in their right mind is going to sit outside and drink coffee or for that matter isn’t going out for any reason. The fact that 75,000 reserves have been called up means the three friends that run the Sushi shop have had to take off their aprons ,put back on an IDF uniform and pick up an M-16.

The economical impact on Sderot’s fragile economy will be monumental. When shops and factories close workers stay home and bills can’t get paid.

There is a proposed cease fire and it will be announced tonight at 9P.M. and go into effect at midnight tonight, Pray it holds. Just maybe Sushi Moto will be open again soon and our sons will be back home. 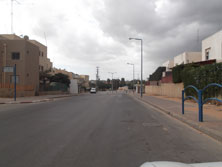 In the last twenty minutes there has been a non-stopped barrage of outgoing artillery fire as well as a constant barrage of incoming rockets to all parts of the south. I am looking forward to midnight.

The scary thing and the reality of it all is that in the past no cease fire has ever held otherwise I would not be in a bomb shelter today writing this story. As long as the Hamas leadership believes that Israel does not have the right to exist I can’t see peace ever being more than an elusive dream with periods of calm and periods of bloodshed. I wish I was wrong but I don’t believe I am.

In the states Thursday is Thanksgiving. We to hope to celebrate thanksgiving as well, for you, surviving that first year in 1621 and for the food you had; for us, this year I hope it is for the shalom we have had for the past 48 hours and a hope for a continued shalom for many more day.

We all have something to be thankful for even in our situation of those of you who live on the east coast and for the first time will not be sitting at that same old table you have been sitting at for year. May we all experience Shalom.