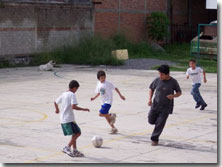 It is so nice to report that the past few days have been quit here in Sderot, with only two Tseva Adom’s. Today there are kids playing soccer across the street, the Russian community has set up their sellers tables on Yerushalayim Street, people are out walking and Shabbat is being celebrated here in Sderot.

The silence and calm of the past few days was broken tonight at 7:10 p.m. As the Tseva Adom was once again sounded the play ground emptied. It reminds me a little of when you were a child and would play ball in the street;  (where I grew up as a kid you could do that.) You would all yell “Car” when someone saw a car approaching. The car would pass and you would continue the game. The group of kids did just that tonight.

The sad thing is, most of the people living in the west do not hear about the people in Sderot but they do hear about the “humanitarian crisis” in Gaza.  A recent article in the Jerusalem post put it this way… “The dead, the wounded, the orphaned will multiply on both sides. While Hamas will rejoice at its losses and use them as further propaganda against Israel, as far as the Western mainstream media is concerned any Israeli losses will become mere statistics… it’s happened every time in the past.”

“I am not sure what you see or hear concerning the innocent men woman and children who are living here in Sderot  who live in constant fear, but there need to be a voice crying in the wilderness for them.” stated Avigdor Avshalom. “If people only knew what we go through, what we live with day in and day out. There are two sides to every story. It’s sad to say most western mainstream media only report from the other side of the Gaza.”

You don’t see the CNN or Fox van parked here in Sderot except when Senator McCain and Senator Obama came to visit. When the media show is over, all that is left in Sderot is a people that live in the present, the here and now, not knowing where the next Kassam will land.