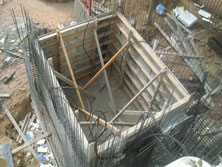 In January of this year I was told that construction on the three story bomb shelter to be built at my apartment would begin shortly. Sure enough material started trickling into the staging areas, underground utilities were identified, trees removed, access ramps were built and then all activity stopped.

They went to this building and that building. Footing holes dug here and there, but not at my apartment. As walls went up and bomb shelters were taking shape I was still looking forward to the mess and inconvenience to start at my place.

In May they came back and dug the four foundation footings each one is 2 feet in diameter (60 cm) and thirty feet deep (10 meters). The steal was set the concrete poured and then silence for the next two months.

You may ask what is the hurry for the bomb shelter to be build when thing have been quite in Sderot for the past several months… The answer… all that can change with 15 seconds notice, the fifteen second notice you get when the “Tseva Adom” alarm is sounded. But there is a greater urgency than that to me.

In September Fatah wants to partition the UN and ask for them to recognize a Palestinian state and that Israel should be divided and that the 1967 “Green line” should be the border; that’s what concerns me. If a Palestine is recognized by the UN, what will the response of the Palestinians be? Will they demand there UN given land, will they take what ever steps they think is necessary to take possession of this UN given land, will Kassams once again fly, will the third Intifada begin. 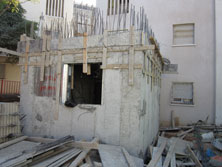 I must admit, I feel safe here in Sderot; yes the anxiety level is high some times and the adrenalin is pumping faster than usual on occasion but over all I feel safe. Over the past eleven years G-D has had His hand on Sderot, His hand has been on the rest of Israel as well. It is for that reason, His faithfulness that I can rest in His Shalom, His peace. So why the urgency for bomb shelter?..

Ha’Shem has given me a brain and common sense and to sit on the roof of my apartment when Kassams are being fired is not the place to be. It is Him who is providing the bomb shelter for me. Yes the government is paying for it and the Bedouins and Arabs are building it but it is G-D who is providing it for me.

I would like to think I would never need the bomb shelter and that it would just become a third bedroom for me but the bomb shelter is just like the “War Box” project; the funds were not there until now. Go Figure! The L-RD has a way of giving us what we need in due season and apparently this is the season for both. It makes one to stop and think what is down the road and around the corner; Just a thought.