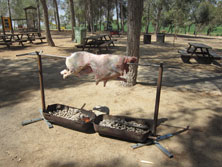 The month of April was a busy month. Besides the 400 families we gave food to there was Passover, Unleavened Bread, Holocaust Remembrance Day, Solders Memorial Day and Independence Day.

Passover started weeks earlier as we look to see if the barley was Aviv; a certain stage of ripeness. Depending on barley we either start the first month or we have a thirteenth month. I know it seems all so odd and strange but YAH’s calendar is a lunar calendar and His feasts are governed by that and not mans gorgonian calendar.

The lamb was slain on Thursday afternoon and on the day of preparation of Passover the fire was lit and the lamb was roasted. Eight hours later we remembered His Passover with Roasted lamb, bitter herbs and unleavened bread.

To watch the lamb slain gave Passover a whole new meaning and a new perspective.

On the first Shabbat after Passover we started to count the Omer. We are told in Leviticus 23:15 “And you shall count for yourselves from the day after the Sabbath, from the day that you brought the sheaf of the wave offering: seven Sabbaths shall be completed.”

It goes on for the next several verses and explains about The Feast of First Fruits; More on that in our next update.

The next two days of remembrance were for the fallen, those six million Jew that were killed during the Holocaust and the second was for the solders that have made the extreme sacrifice for their country.

For both those days the air raid sirens go off through out all of Israel and everyone stops what they are doing, stands  still out of respect for both groups of people. If you are driving you know at 10 a.m. you stop your car even if you are in the middle of the highway and get out of your car and show your respect.

The last special occasion of the month was Independence Day. Without our deliverance from slavery and our entrance through the Passover door and on to the threshing floor of unleavened bread there would be no freedom from slavery.

You have to remember those Jews that died simply because they were Jew and those that died defending this country before you can ever celebrate Independence Day.

Ultimately you have to remember that it is because of promises YAH made to Abraham, Isaac and Jacob, that Israel and His chosen people exist today. We need to remember He is our defense and our salvation.