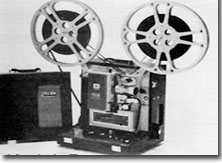 When I was in high school, I finally reached the epitome of my high school goals, to run the 16mm projector. Not everyone could do it and not everyone got the tap on the shoulder to take on this awesome responsibility. The pressure was on as I made the film loops just right and made sure the film was properly placed on the little gear wheel. Then the big moment, you turned it on… a master piece and a flawless presentation… Then the fun came… rewinding the film.

As you secured the film on the take up real the big moment was just about to happen as you hit the rewind button. As I sat there staring at the film being rewound, the take up real spinning like the dickens and the full film real seemed not to be moving at all. But there came a point when the take up real had more of the film on it than the now half empty film reel. As the film continued to transfer from one reel to the other, the full one seems to go slower and the other was spinning out of control. You may be asking yourself at this point…”Where are you going with this” or “does the train of thought have a caboose?” Yea there is a caboose!

When my son was sixteen, (now eleven years ago) commented how fast time was flying by and how soon he would be graduating from high school. Like I said, that was eleven years ago now (seems like yesterday). Time is indeed flying by and time is short, for me, for you for all of us, even for this world as we know it. The reel of time is being wound up and the closer we get to the end of this age and to the reel of eternity placed on the projector, we will see the reel spinning faster and faster as it empties and time will fly by until it comes to its end, flaps a few times and then Ha’Shem turns off the projector.