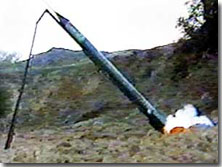 The still of the night was shattered at 2a.m. by the all too often heard “Tseva Adom”. Within that fifteen second warning time frame the detonation of yet another Kassam rocket was heard, this time it was much closer, it hit somewhere close to town.

Israel says, “You fire a rocket, we will close the border and no supplies will be allowed in”; in response to Hamas says, “if you close the border crossing and we will fire Kassams. The vicious cycle continues.

recurring cycle, but with one noticeable difference. Shortly after the “Tseva Adom” and the explosion, there was another thundering sound and it was followed by a flashing of light in the sky. For the next twenty minutes or so there was an non stopper lightening and thunder storm, that from this vantage point was directly west, over the Gaza strip.

It called to mind Exodus 20:18 “Now all the people witnessed the thunderings, the lightning flashes, the sound of the trumpet, and the mountain smoking; and when the people saw it, they trembled and stood afar off”. It reminded me that that a day is coming when G-D will judge this earth and all its wicked deeds and with that judgment there will be great lightening and thunder and those who are on earth at that time will tremble

But sad to say, until that day mans inhumanity towards one another and the love of ones self and the care less attitude of ones neighbor will continue. And the vicious continues.