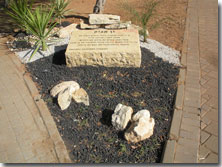 As Director of Hope For Sderot, I am pleased and blessed that we were able to serve and to work under The Almond Branch Intuitive as they planed, executed and totally funded this project. Thank you for your unconditional outpouring of love to the people of Sderot.
In His Love, His, Stewart
Stewart Ganulin
Director
Hope For Sderot
The portion of the Afek Memorial Park we volunteered to asset the Almond Branch Initiative was completed on Friday even with a last minute addition of three more benches and two more pergolas. The Master plan called for five sets of table legs to be set in concrete as well as the three pergolas frames erected. The tables await their tops and seats while the pergolas await their roofs from the Almond Branch team. The memorial garden was designed and created by the Almond Branch team .
It has been fun to see the park take shape little by little over the past five weeks as we helped dig, hammer, screw, drill and stained wood parts. It is organizations like the Almond Branch Intuitive ( a evangelical Christian organization)that step in and accomplish the things that in the natural would seem impossible. With unconditional love, expecting nothing in return except to maybe hear someone say “Praise G-D”, they went to work. It has also been a joy to see kids playing on the new playground equipment in the mornings before school as well as into the evening as the lights in the park come on. 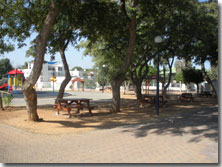 Friends here in Sderot came together to supply some of power tools and the ladders that were needed to complete the park in time for Monday evening’s dedication. It has once again been incredible to watch how the people of Sderot and community members came together as a family and as a team to help The Almond Branch in the completion this park project .
It is still our hope to plant a “Hope Garden” within Afek’s Park and to dedicate it on Tu BiSh’vat or the “New Year of the Trees.” The Jewish Arbor Day falls on January 29, 2010. This will give you a little more time to become part the of the Hope For Sderot addition to Afek’s park and give our backs a chance to recuperate from the past five week of work. If you would like to become part of the “Hope Garden” please click here.