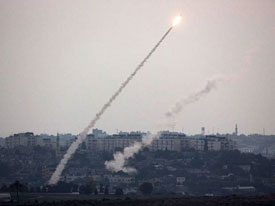 Wednesday, July the 8th marked one year since the beginning of Operation Protective Edge For the next fifty days we would be running to our bomb shelter morning, noon and night. The sound of outgoing artillery, tank fire and Iron Dome rockets launching as they intercept incoming Kassams would permeate the air for the next fifty day.

Thought we have lived with the threat of Kassams for the past fifteen years and making our fifteen second dash to our bomb shelters or safe areas, it was still very hard for not just the residents of Sderot, but this time around for many other cities in Israel as well. This time around we would face a new and even scarier threat, tunnels, tunnels that would allow terrorists to pop up anywhere in Sderot, exposing us to a whole new fear, a whole new anxiety, a whole new threat that we had never experienced before. 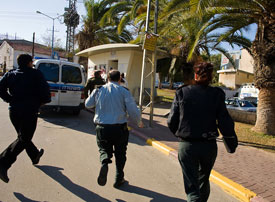 Over the past year there have been a few Kassams and a few “Tseva Adom”. For the most part it has been quiet. At the risk of sounding like a broken record, most people think because Kassams arn’t falling that everything is O.K. and that the people of Sderot are doing just fine, yet there’s nothing farther from the truth.

People still jump at the sound of a slamming door, or at the sound of a dog barking because that bark sounds the same as when the Tseva Adom alarm sounds; We still look for the next place to hide while outside. Unemployment is Sderot is still high and those who have a job work at a minimum wage jobs or have a temporary part time jobs which comes without benefits i.e. health insurance, sick leave, retirement or vacation leave and they can be let go at any time. 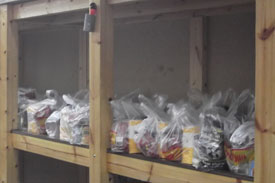 Hope For Sderot is a vital part of the lives of those we help, in some cases making the difference between having food on the table, the electricity kept on, diapers for your children or incontinence supplies for the elderly. So when we are closed for a month because we do not have the funds to purchase food for the following month it affects our families tremendously.

We only order food when we have the funds on hand. Unfortunately, the “Closed” sign has been placed on the door for this month. What we have on the shelves will not feed everyone this month but we will be able to help about sixty out of the 450 families on our list.

Let me share with you just two of the encounters I had since the sign has been put on the door, both stories broke my heart.

Luda, is a single mother 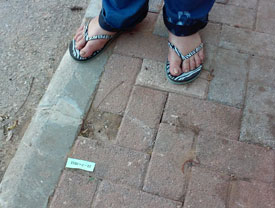 who along with her son both suffers from emotional problems; we also know her from ENOSH. This past Thursday while we were making our delivery to ENOSH she stopped me and with the little date card which tell you which day to come in for food in hand asked if she could come in a week early.

I had to tell her we well closed next week. She started to cry and with tears in her eyes and as she buried her face in her hands she asked me “what will do?”

I told her we will take the sign down as soon as we have food. She looked at me with a blank stare, as if she had been told the worst possible news, dropped the date card on the street and walked away.

Moti lost both his legs to diabetes not too long ago. He stopped me on Friday and asked when he could come in to pick up his food. 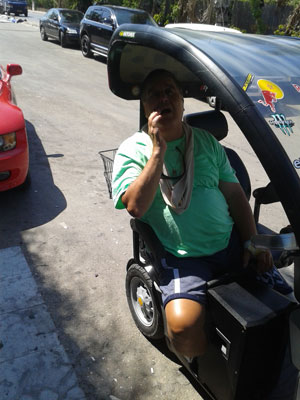 I told him we were closed and he ask “Lama, Lama” (why, why). I told him we did not have enough money to buy the food. He then cried “Eti, Eti”, he needed to talk with her. Eti takes care of the people as they come in for their food and manages our list of recipients;

She has lived in Sderot all her life; has lived through the past fifteen years of terrorist attacks; she also has a heart the size of the state of Texas that she has dedicated to the people we help as well as too Hope For Sderot.

I got Eti on the phone and she reassured Moti that she would make sure he got food on Sunday morning. She will also call Luda as well as go through the list to see which other families we can help.