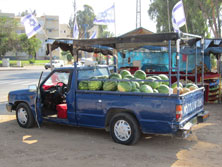 As I look out the window to the parking lot below I can see his familiar truck with its blue shade cover and Israeli flags. Today, as it is on most afternoons, his truck is laden with the wonderful fruits of summer. For a few brief moments my mind drifts back to summers long ago. Summers, that as they approached each passing year brought with them familiar sights and sounds.

I can almost hear the familiar melody of the ice cream truck as it passed by and the excitement of chasing after it with a quarter tightly held in hand. The scent of soap and bleach from the nearby spinning washing machine is reminds me of the smell of chlorine as the public pool was made ready each year for its annual opening. Each year, with great anticipation, we looked forward to that first weekend in July.

As I look back out the window to the parking lot below the large cement truck that is there suddenly seems so out of place to my reminiscing. Slowly my mind drifts back to the present… to a parking lot filled with the sights and sounds of men building bomb shelters. And as that reality comes into full focus my thoughts are turned to this past week’s news headlines; “Week-Long nationwide civil defense exercise begins”.

The “Turning-Point” exercises have been conducted annually since the 2006 Second Lebanon War. This year’s exercise will be the most extensive to date with scenarios depicting massive rocket fire throughout Israel, attacks on the electrical grid, and a simulation of a large-scale evacuation of a major population center. For the first time the members of the Knesset participated in an evacuation and “command control” scenarios played out from the brand new complex located deep underground somewhere in the mountains surrounding Jerusalem.

Israel is at the center of the current “shaking” of the nations throughout the Middle East. With the Middle East in turmoil, Israel is preparing for the possibility of a regional war. Military leaders estimate that up to 800 rockets a day could be fired into Israel in the event of a war fought on multiple fronts.

As I reflect back over the past two weeks and how we have been very busy with assembling the “War Boxes” and how the men now at work downstairs are busy completing their work and I think about the practice drills and sirens that have been part of this past week’s activity, I am struck by the realization that these are the “sights and sounds” of Israel preparing.