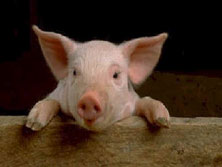 A pig has a split hoof… from the outside, by his foot, by his walk it looks like cow’s hoof or that of a sheep or a goat. He could be mistaken for one of the foods the children of Israel could eat but on the inside the pig is different, it doesn’t chew the cud.

In Exodus we are told we can eat the meat of animals with split hoofs. But then HaShem goes further and declares that not only must the animal have a split hoof but it must chew the cud.

It is all about what in going on in the inside and not so much about what it looks like from the outside that counts.

I may look and act the part of a child of G-D after all I know all the right words to say, I know the words to all the songs and prayers… I have a split hoof… but on the inside my heart is at the bowling ally or the golf course. Maybe I am mentally still at work or going over my problems, I wish I didn’t have to be here. I have a split hoof but I don’t chew the cud. My gut isn’t into prayer or worshiping G-D, my heart is far away from HaShem.

Could it be because they were not of Egypt even though some of them were born there? Could it be they were Jews from birth, it was in their blood, their DNA and it made no difference where they lived; they remained Children of Israel, even while enslaved and living in Egypt.

You may be in a particular geographic location, surrounded by different people groups but you don’t have to become one of them. You need to remain pure and holy; not compromising your values not doing things Torah or the Bible says not to do.

If you are truly, truly in love with HaShem and you have that split hoof, if you call Him your G-D then the inside has to match the outside, you need to chew the cud. In passing; as the cow chews its cud, taking it in chewing a bit swallowing it, bringing it back up and chewing a bit more, getting a little more nurturance out of that same grass. We to are to take the word of G-D in, chew it a bit, let it sink in to our hearts and then bring it back up or back to mind, chewing on it a bit more, thinking about it a bit more only to let what we have learned from His word sink in. Like the cow we can chew three four times on that same portion of His word and gain spiritual nourishment each time we chew.

I hope this has mooo ved you because it is all about what is on the inside, that part no man can see, that place that only G-D can see… and He does.