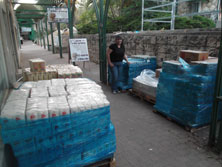 When we received our last food shipment it was the usual 470 cases of food that comes on six pallets. They filled the sidewalk in front of our storefront until they were unloaded and brought in and put away.

In the past we have had the same high school students come and help us bring in the food, but as of this new school year our helpers are out of school now and serving in the IDF.
Last month us old folks brought the food in… it went a bit slower but it all made it in! At 63, the cases of food are still not a problem to move although, getting up and down the ladder or up off your knees seems a bit slower! My mom at 85 used to laugh and say “getting old isn’t for sissies!”

We wanted to try to find some kids once again to help but to our surprise we came up short. We were resigned to the fact that we would once again do it ourselves and to be able to do was a blessing in and of itself and it was a labor of love to do.

As the first pallets were being taken off the truck Gedo one of the people we help just happened to be walking by and asked if we could use some help. Avi was the next to stop by. We have been helping feed the people Avi takes care of through his organization for the past four year; he too pitched in and out of his own pocket made a cola run for us all to have something cold to drink.

Manassah another one of the people we help also showed up and he too was more than eager to help as he started carrying in cases of olives. Michael came to help even though he is sick and before we knew it all 470 cases of food were on the shelves.

Over the years Hope For Sderot has helped many people and has become a safety net to them as well, so when today we need help they are there for as we have been there for them.
All this is made possible by your love and caring support. We would like to take this opportunity to once again say “Thank You”.